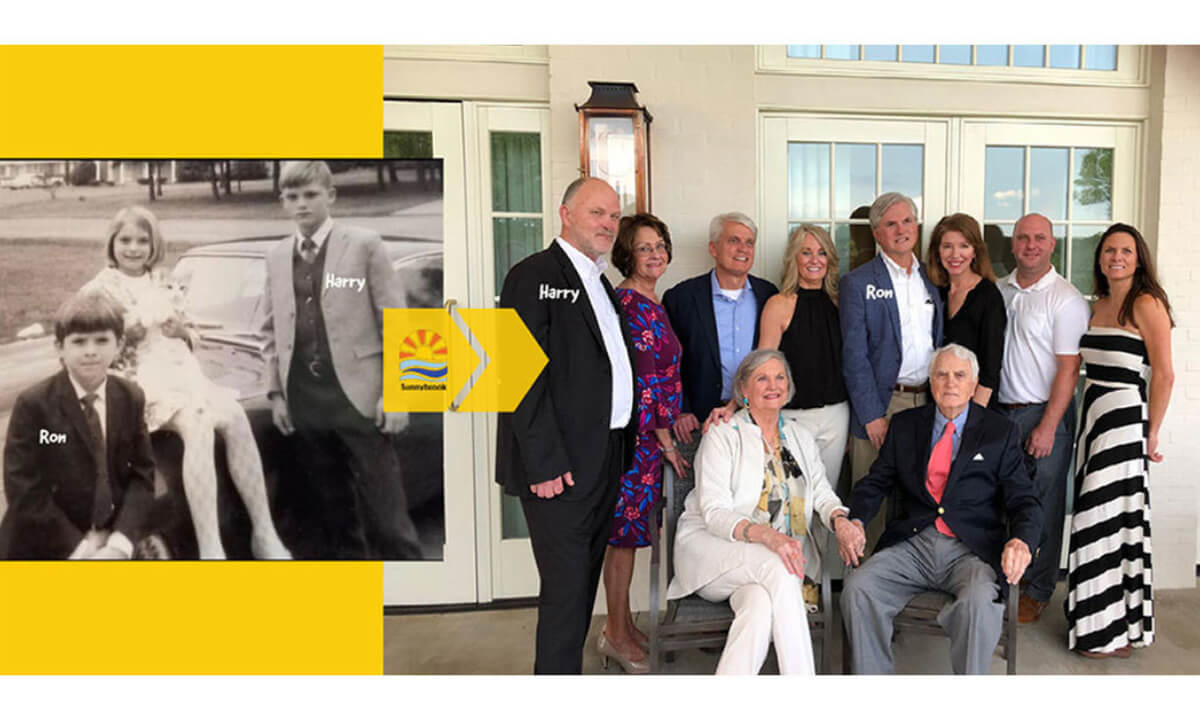 In the first of this two-part interview, we explore the personal connection that Sunnybrook Director of Advancement Ron Veazey has with foster care, offering his perspective on a lifelong brotherhood and friendship shared with Harry Liggett.

Redefining the Concept of Family

“The definition of ‘family’ is not necessarily blood, obviously. It's a history of time spent together and a safe bond between people that love each other,” Ron Veazey reasoned. Family has always been an essential part of Veazey’s life and identity, even if it can be challenging to define. Before the age of 5, he may have used a traditional definition that included genetic relatives, like his parents and sisters. Then he met Harry.

“In 1967, my parents brought a boy home from the Methodist Children's Home and said this is your foster brother, or your new big brother!  Harry was 8 at the time and stayed with us on and off for about six years.” he said.  “It was so confusing when I was young because he would stay for several weeks, then he would leave for a couple of months to be with his mom, stay for several months and then leave. It wasn’t until I was a teenager that I fully understood the reality of his difficult situation with parents who struggled with both alcoholism and depression.  My mom has expressed that they would have adopted him however there were several dynamics that prevented that from happening.”

“What I always understood is that he was family despite the chaos of his circumstances. We had Christmas, birthdays and holidays together. My parents helped raise him, helped him through college, and modeled for him a life without chaos. He got married, has two children, and now one grandchild and one on the way. My parents supported him as a son through all of that, and he recently spoke at my father’s funeral thanking him (and my mom) for taking in a needy child and showing him love, family skills, guidance, direction, and discipline.”

Veazey paused, thinking back on his definition of family.

“It crosses over the genetic divide of blood relations and it's almost spiritual. It’s like how Christians are adopted into God’s family as a result of Christ’s ultimate sacrifice for us…we all are orphans or foster children.” he said. “That’s just how I look at family. My sisters and I are genetically related however Harry is still my brother. Family is about having a history, a common connection, and a sacrificial love for each other.”

The Ripple Effect in Sunnybrook’s Mission

Sunnybrook is dedicated to helping every child and youth in Mississippi experience the advantages associated with growing up in a healthy Christian family environment. But the effect of that mission touches the entire community for generations.

One of every five people who age out of the foster care system lack a home when they turn 18. Seventy percent will experience homelessness as adults. By the time foster youth are 24, only half of them will have steady employment. The same percentage develop substance abuse.

Sunnybrook works every day to improve those odds.

Veazey states, “The goal is to provide educational assistance, workforce training, life skills, and psychological care so that each resident can thrive to form future families and become a net-positive in our community. Except for children with serious health issues, foster children are possibly the most vulnerable population in Mississippi, and that’s saying something. There is a close link between foster kids and future drug use, incarceration, homelessness, teen pregnancy and unemployment. Sunnybrook works directly with kids and families, but you're not just helping this one child,” Veazey explained. “Changing the cycle of dependency of someone’s life has a multiplier effect. They find stability and go on to get married and have children. Their children have children, and eventually over several generations, thousands of people have been positively affected.” Veazey adds, “That one person that we helped, who had no hope and needed a “safety net”, is an investment in our future. It’s just like investing money where the future value of money concept says the $1 you invest today could return much more in 10 years depending on the type of investment vehicle you use.  Sunnybrook deals daily with investments in vulnerable people and we trust that God will provide a return on our investment through Sunnybrook’s and our donor’s commitment to this ministry.”

Veazey, who retired from a 33 year banking career prior to joining Sunnybrook states, ”I have personally witnessed God’s return on investment in Harry’s life and I now invite our donors, sponsors, and partners to join me in changing the trajectory of future generations due to our investments today in the lives of vulnerable foster kids.”

If you’d like to make a dollar for dollar tax credit donation to Sunnybrook or learn more about the programs and areas of need, please contact Ron Veazey today at SunnybrookMS.org or call him at 601-540-4253.

Visual Designer & Front-End Developer based out of Charlotte, NC.