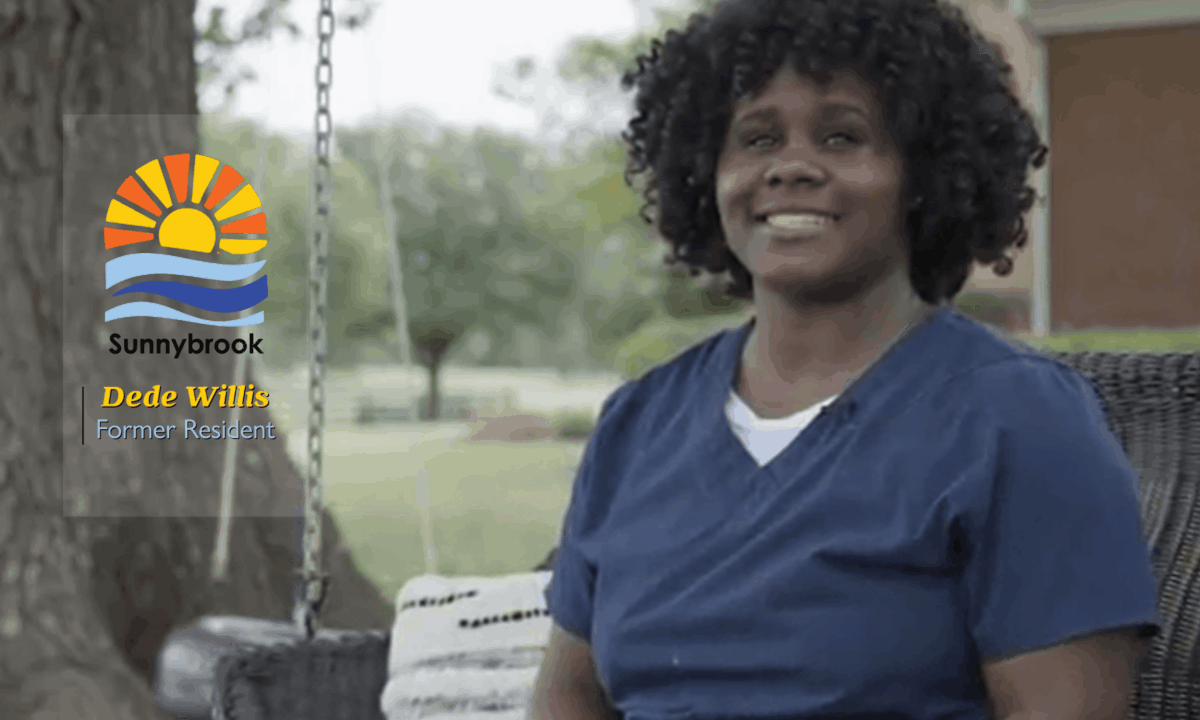 Swaying back and forth on the porch swing in the backyard of her teenage home, Deondra Willis reflected on her experience at Sunnybrook, a residential campus supporting foster youth ages 16-24. Her journey began five years ago when she found herself standing in front of the Christian haven tucked away in Ridgeland, Mississippi.

The opportunity to learn and grow at Sunnybrook did not come without hardship, but her maturity speaks to the many obstacles she has overcome throughout her life. Her desire for something better inspired her to leave her family home in search for a more promising future, and she found that at Sunnybrook.

When she was 15 years old, Deondra, affectionately known as Dede, walked into her new room at Sunnybrook with a trash bag full of clothes, a tote bag and a picture collage. Her belongings didn't fill the trunk of a car but what she lacked most was the love and support of family.

Eventually she found the love and support where she least expected it.

"Sunnybrook to me is a family, more like a safety net. I made a lot of friends. Their family was kind of like my immediate family. I love the houseparents and staff, even though some come and go. You still have connections afterwards," she said.

"When I first came to Sunnybrook, I was shy and confused. I didn't know what was going on," she reminisced. "I'm very observant, so I was just looking around at everybody. I had never been in a group home before, Sunnybrook was my first ever group home."

One of the hardest transitions for her was living with a roommate.

"I'm sharing a room with somebody, which I shared a room with my cousin, but I don't know this person and I'm in a room with them," Willis explained.

She quickly learned how to live in the same room with another teen and follow the house rules. As a freshman in high school, she was also adjusting to a new school on top of her new home and new family.

Although she tried to stay under the radar, the staff noticed her maturity, wisdom and leadership.

After excelling from freshman to senior year of high school Dede graduated in June 2021. Two months later she wrote to a judge requesting emancipation from protective custody. When her request was granted she could leave Sunnybrook at any time. Despite staff concerns that she might not be ready to live on her own, she left two months later.

"When I left Sunnybrook in 2021, [I was] energetic, talkative, irritating, annoying," Willis said with a smile. "I had a bunch of suitcases, a bunch of clothes, a bunch of shoes. It was a lot, I had to get a U-Haul.

And I felt love by everybody. I felt good about myself because I knew that I got this."

While Dede felt confident and prepared to leave, the staff shared their concerns with her and suggested she wait a little longer.

"Dede thought she was ready for the real world so she discharged and got out there," Sunnybrook Resident Development Coordinator Amber Bennet said. "And it's a scary place. About six months later she realized she wanted to come back. We welcomed her back with open arms and she's thriving now, she has a full-time job."

Grate was also happy to have her back. He was impressed with her willingness to ask for help when she needed it.

"She left us, but the humility and the wisdom it takes for anybody to come back and say, 'you know what, you were right? I was wrong. Can I come back?' And that takes swallowing your pride and humbling yourself. But she did that because she's wise and because she is a humble person.

Dede is literally the perfect example of what we hope will happen to our residents as the result of being at Sunnybrook," Grate said.

Dede's life looks very different today than it did when her Sunnybrook journey began five years ago.

At the age of 19, she has graduated high school, passed her certified nursing assistant test and works full-time at a local nursing home. There was once a time she wasn't sure she would finish high school, but she's done that and much more.

Not only has she accomplished many of her goals, she has big plans for the future.

"Now I have my own car, I pay for my own car insurance, I have my driver's license, I will hopefully start the LPN program soon. I'm building credit right now and in the process of saving for an apartment.

I want to become a traveling nurse and I want to travel."

There may have been a time when Dede felt Sunnybrook was holding her back, but she has now come to realize it has been preparing her for an even better future. The staff at Sunnybrook have noticed a positive change in her demeanor as a result of time spent in the program.

Sunnybrook Houseparent Sandra Jones said, "Once she got here she realized the houseparents loved her and were willing to help her make a change in her life. She's a totally different person. She was quick to speak before thinking. Now she takes it in and thinks about it."

"I greatly appreciate her and I have great respect for who she is and what she's done in her life," Grate said. "She took ownership of her destiny and her future. I am so very proud of what she's done."

Even Dede can see the changes in herself, from a more outgoing personality to suitcase upon suitcase of belongings. She attributes these positive changes to the fact that she does not shy away from life's changes, challenges and discomforts.

"Sometimes you have to be in an uncomfortable position in order to grow," she wisely stated.

With this mentality Dede has not only grown but thrived over the past five years. When it's time to leave Sunnybrook for the last time, she will be well on her way to the life she was meant to have.